A term which is not accepted, especially by our leaders, to explain the current situation that a part of our population is facing. But with future perspectives that offer unemployment and precarious labor as the most immediate reference, emigration has become an obligatory alternative. From our point of view, this gives legitimacy and consistency to the use of the concept of exile to define this reality.

According to the dictionary of the RAE (Royal Academy of the Spanish Language), exile is defined as “Expatriation, usually for political reasons”. The truth is that most  people associate “Political reasons” with “ideological reasons”, even though politics has become increasingly less ideological. While it is true that the first of the 12 definitions for the word “politics” in the RAE is “belonging or relating to political doctrine“, the second definition is “belonging or relating to political activity“. And this is where we want to make our argument.

Under the laws of most countries, the role of an elected or appointed official or politician is to maintain, manage and administer the public resources and is to be held fully accountable. These laws also state that politicians must work in service of the public and  to promote the  general interest of the citizens and must carry out their work under a code of ethics and professional conduct. Furthermore, transparency policies guarantee that elected politicians serve the people and not their own interests. In fact, the preamble of the Spanish Constitution states the following: 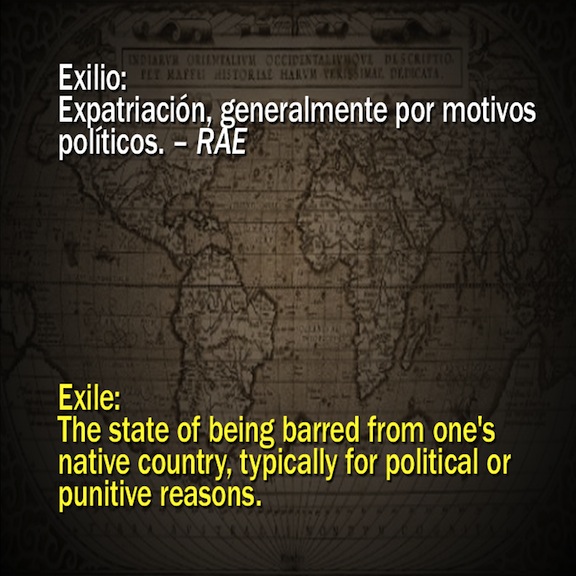 “The Spanish nation proclaims its will to promote the progress of culture and of the economy to ensure a worthy quality of life for all.”

Moreover, Article 35, among others, makes mention of a mandate received by public authorities to carry out policies that guarantee full employment and prevent inequalities. It is clear that this has not been the case in Spain in recent years.

The Spanish Exile team and I feel that the widespread corruption among the Spanish political class, its disinterest in the demands of the citizens, which paradoxically is a result of its subservience to the Troika and other entities of the international financial structures, and the rigidity of the Spanish electoral system, are  at the foundation of the troubled Spanish economy and the massive emigration wave it is causing. No one is leaving the country because they are victims of ideological persecution (at least not that we are aware of), but that does not mean that the causes behind this emigration are not primarily political.

People should not be pulled from their land or country, not by force.

We are born and they cut off our umbilical cord. We are banished and

no one cuts off our memory, our language, the warmth. We have to

I am a monstrous plant. My roots are thousands of

kilometers away and we are not connected to a stem, we are separated by two seas

and an ocean. The sun looks at me when they breathe in the night.

hurting in the night under the sun.